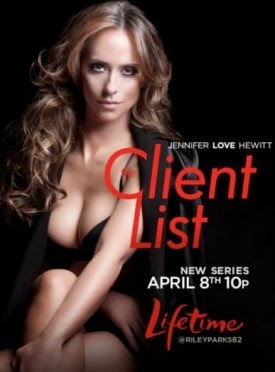 Tonight’s premiere of The Client List with Jennifer Love Hewitt did not disappoint. It was everything I expected after watching the original movie and more. Starting at roughly the same plot line as the movie, we meet Riley Parks (Hewitt) and her family–husband Kyle, mom Linette (Cybill Shepherd), brother in law Evan (Colin Egglesfield), and their children. The plot is simple–Kyle and Riley have fallen on hard times with both jobless and trying to make ends meet. Soon Riley is offered a job at a typical (or so she thinks) spa as a massage therapist. But she quickly learns that the spa is a little more than meets the eye. Run by sassy Georgia (Loretta Devine), this spa helps both it’s employees and patrons by offering some extras.

Riley’s not too sure about this, but she knows she must do what she needs for her family. Then, things turn worse when Kyle unexpectedly leaves Riley and the kids. His reason for leaving wasn’t readily explained but looks to be coming up in the next episode according to the previews. Now, Riley is left in a predicament…go with her conscience and quit her big tipping job at the spa or keep working to pay the bills. We see Riley’s internal struggle well through Hewitt’s acting, so props to JLH for the great job!

One of the featured clients in this episode was Jared, who like many of the clients in the movie wanted someone to listen to him. He wasn’t getting that (or anything else) at home, but Riley was there for him. Long story short, Jared’s wife vandalizes Riley’s car and even shows up at her house where Riley helps her understand what’s wrong with her marriage and, in short, saves it.

Now enter (again) Evan, the brother in law, shirtless, mowing Riley’s yard one day when she gets home early… Uh oh…do I smell a little romantic fling??? Evan accuses Riley of having a sugar daddy after he hears she has paid her mortgage in cash. Riley throws him out of the house and again, you see her struggling with the conflict of the job. But not to worry, Riley and Evan make up at the end of the episode just in time for Georgia to show up and talk Riley into taking her job back.

Next episode looks to be promising as well, with the return of Kyle and possible flames between Evan and Riley.

The verdict? I give The Client List four out of five stars after viewing the pilot. Good first episode with some growing room left. Make sure you tune in next week on Lifetime at 10 / 9 CST for the next episode!