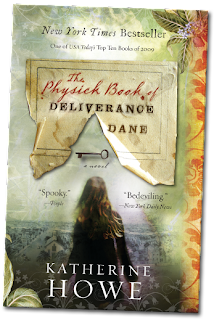 Halloween is one of my favorite holidays for various reasons, so I always try to read a scary, semi-scary, or strange book around that time.  This year my Halloween related read was The Physick Book of Deliverance Dane by Katherine Howe.  I read through several reviews of the book before I decided to buy it–some were scathing and some were good.  I decided it would be best if I just picked it up and read it to decide for myself.  I’m glad I did.  I thoroughly enjoyed the book.  I’ll agree that there were some things I would change, but overall, the book was well written and historically accurate, which was a must since it is technically a work of historical fiction.

The book draws its story on the Salem Witch Trials of 1692.  Connie, the main character, is a PhD candidate at Harvard who is struggling to write her dissertation in American colonial history.  Ultimately she picks the Salem Witch Trials as her focus, but she doesn’t yet know what exactly she will be writing.   While working on her dissertation, she has to go to Marblehead to prepare her grandmother’s antique house for sale. In the process of cleaning the house, she discovers a key with a hollow interior in which she finds a slip of parchment with the name Deliverance Dane written on it.  I’ll interject here that, yes, Deliverance Dane was a real person accused of witchcraft at the end of the Salem trials, although very little is known about her.  Anyway, back to the book.  This discovery leads Connie to discover many oddities about herself and her family.  It also beckons the question, “What if the Salem hysteria was really based on real witchcraft?”  Thankfully, the book doesn’t turn into a strange, new age, Wiccan type story, but stays true to the Old World idea of witchcraft complete with old incantations in Latin and descriptions of the “physick” that really was used to help people.  I won’t give away much so that you can read this book for yourself.

I could really put myself into the place of Connie since historical research and writing are my passion.  I’m sure the first short story or novel I produce will be a historical fiction book.  Howe beautifully describes her characters and the different settings from Harvard Yard to the old house on Milk Street, and I think this is really what helps the reader get into the story.  I also liked that a small romance is included in the book, but it doesn’t dominate the entire story line.  There wasn’t a character in the story that wasn’t a real character that one could relate to, even the one who ultimately became the villain.  As I mentioned before, Howe’s description of the settings–the hallowed halls of Harvard, the libraries filled with the ancient texts, the inviting streets of Massachusetts, the antique house on Milk Street–all really help the reader picture each place down to the tiniest of details.  Some reviews I’ve read didn’t like the fact that Howe included so many details, but in a work of historical fiction, I think this is key to making the book work as both historical fiction and an enjoyable novel.  I think the book is simply wonderfully well written and intriguing.

Now, what would I change about the book…  As I said, it is a well-written and intriguing work of historical fiction, and being a history major and being fascinated with the Salem Witch Trials, I enjoyed the treatment and use of them in the book.  One of the things I liked and disliked at the same time was Howe’s inclusion of chapters that take the reader back to the 1600s & 1700s so we can learn more about Deliverance and the trials.  I think that these should have been included but they were at such sporadic points that you sort of lose the back story and lose the connection to the main “modern day” characters with the back story.  I also loved the way Howe ended the book; however, I found it to be a bit predictable, at least for me.  But I’m also notorious for figuring out endings of lots of books that many people don’t, so that may just be a “me” problem.  There were also a few inconsistencies in the book, but I’ll chalk that up to this being a beginning novel for Howe.

Overall, The Physick Book of Deliverance Dane was a very easy and enjoyable read even if it was 376 pages long.  There were nights that I would read it that I didn’t want to put it down.  So, with the mixture of good and mediocre things in the book, I give The Physick Book of Deliverance Dane a B.  I would recommend it to anyone who likes historical fiction, books about the Salem Witch Trials, or anyone who wants to read a good spooky book.