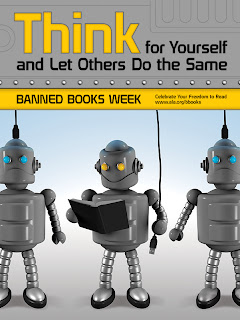 Today begins Banned Books Week 2010!  I love this week in the literary year.  In my opinion, no book should ever be banned.  Yes, that’s what I said NO book should ever be banned.  Almost all books can be treated as literature in some shape, form, or fashion, and that should be respected.  I guess that’s why I think having a Banned Books Week is so important.  I have always thought that it is quite interesting that most of the books on any “banned books list” are one or more of the following:  classics, books you are expected to have read before entering college because professors will refer to them, or books that are frequently cited on AP exams (e.g., Beloved).  Personally, between my husband and me, we own several banned books.  We even have two or three copies of some of them.

As I was researching the different banned books, I find it quite interesting as to why some of the books were and are banned.  Most of them are banned for language, political reasons, or explicit sexual content.  I think that many people will see one or two “bad” words, scenes, or characters in a book and assume that because of that, the book has zero literary value.  That is simply not accurate.  While I don’t agree that books have to contain explicit language or sexual scenes, there are times that a reader has to hunker down and deal with something so that he or she will become more educated.

Ok, enough of my rant about why books get banned!  So, what are you doing to promote Banned Books Week 2010?  I will be blogging about it frequently this week, and I hope to read several “banned books.”  Here is my list that I will try to get through, hopefully by this week, but at least by the end of the year:
1.  To Kill a Mockingbird (I have read this book a few times, but I thought since it is often banned and the 50th anniversary was just celebrated, that it deserves to be #1)
2.  Beloved (I have read Toni Morrison’s classic once, but I think I would like to try it again.  This book is required reading for most AP English classes.)
3.  Song of Solomon (This is one of Morrison’s that I’ve not read, but it was praised in How to Read Literature Like a Professor so I’m going to assume it is a good book.)
4.  The Harry Potter Series (J.K. Rowling’s best-selling novels have been some of my favorites in recent years.  I have read #1-4 SEVERAL times, and #5-6 a couple of times, and #7 once.  Since the first installment of Harry Potter and the Deathly Hallows will be out this fall in theaters, I thought I’d re-read them all again.)

So, that’s my list.  Technically, there are 10 books on the list, which is why I said it might take to the end of the year.  The Harry Potter books are the ones that will take the longest since there are so many, but I think I will thoroughly enjoy reading my “banned books.”

What are you going to do for Banned Books Week this year?