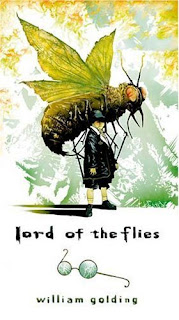 I haven’t fully re-read Lord of the Flies by William Golding since the 10th grade, but it was just as good as I remember.  Just in case you didn’t read it in high school, the book is about a group of British school boys who are stranded on an island after a plane crash.  The fun and games stop when three boys end up dying and the majority of the group turns into savages.  The main characters Ralph, Jack, & Piggy create a group of dynamic frenemies.  Yes, I did just use the term that means friends+enemies.  Ralph, the original leader of the boys, keeps a positive outlook throughout the book that almost helps him only have a sort of tunnel vision where the only thing he wants to do is make sure the fire doesn’t go out and they get rescued.  Piggy is the epitome of intelligence and logic and to an extent, the adult world.  Ralph is the savage that can emerge in all of us.

In talking to different people, from other teachers to students, I have found that many people don’t care for this book because it shows how quickly the boys devolve into a state of chaos and savagery.  Many don’t believe that we as humans could do that so quickly.  Personally, I do.  Yes, that’s right.  I think if humanity allows itself we could end up exactly like the boys do in Lord of the Flies.

So, what is my actual review of the book.  I do think it is a very well written, true-to-life book.  Golding does a great job of giving us details that help us go inside the boys’ heads to see what they are truly about.  The scene where Simon is having the vision of the Lord of the Flies is very insightful and it shows us just how we probably should feel and see things, but ultimately Simon becomes the sacrificial lamb.  We see the boys go from just a group of boys trying to get rescued to a group of boys trying to survive by devolving into savages.  All in all, Golding’s classic gets four out of five stars–a solid ‘B’.  I think that there are ways that the book could have been grouped better so that even more insight could have been given to us about each main character.