It’s a war of epic proportions!  Ok, maybe not, but if you are into the latest eReaders, or if you are looking at purchasingan eReader soon, you have noticed the price war going on betweenBarnes & Noble’s Nook and the Amazon Kindle.  I have actually been fighting a war within myself on whether or not to get an eReader because I’m such a big fan of actual, physical books.  The Nook, actually started this war with the first price drop, and it is now available for $149 for a Wi-Fi Nook and $199 for a Wi-Fi + 3G Nook.  But Amazon.com has introduced a new Kindle for…wait for it…$10 cheaper than the Nook.  What?!?!?  Yes, that’s right for the low, low price of $139 for the Wi-Fi and $189 for the Wi-Fi + 3G Kindle.  When you compare either one of these to the Apple iPad’s price range of $499 to $699 for a Wi-Fi iPad and $629 to $829 for a Wi-Fi + 3G iPad (oh, and you have to pay for the 3G plan), unless you want the varied functionality and overall appeal of the iPad, I’m going to bet you will go for the Nook or Kindle.  So, what will you be getting with these?  Let’s take a look at the Nook & Kindle (Wi-Fi + 3G, since that’s the one most sellers will recommend to you)… 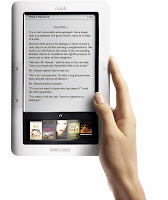 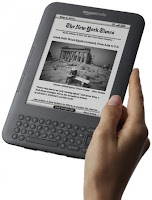 So, which one appeals to you?  You’ll find many reviews that state that, with the new Kindle, that other eReaders (including the Nook) will soon become history.  Personally, I wouldn’t be so sure about that.  The new Kindle was just released for pre-order, which, I think, gives Barnes & Noble time to update the Nook fairly quickly before the Kindle can ship many items.  Of course, Amazon is a larger market than Barnes & Noble, but one of the main appeals to me for the Nook was the fact that I could get my hands on one in a Barnes & Noble store, play around with it to see if I liked it, plus I had a Barnes & Noble Nook expert right there in the flesh to answer any questions I might have.  I don’t know about you, but I would rather buy something where I could go talk to someone face to face if I had an issue so any questions could be answered right away.  The Nook is also more appealing to the eye than the Kindle is.  Ok, so that isn’t a big deal to some, but I’m a big touch screen fan, and the Nook’s touchscreen is quite nifty.  For now, I do think the Kindle will be the #1 eReader (other than the iPad) with this new version Amazon has come out with, BUT I wouldn’t completely discount the Nook yet.  I look for Barnes & Noble to develop a better Nook within the next few months to compete with the new Kindle.  Also consider the fact that the new Kindle is only $10 cheaper than the Nook, so I’d also expect at least a price drop from Barnes & Noble on the Nook.

If I were to buy an eReader tomorrow, to be hones, I would still most likely go with the Nook if only because I can go to my local Barnes & Noble to get one and have it explained to me right there in the store by an actual person.  With technology, I like to try things out before I buy, and I have a feeling I’m not the only one who likes to do that.  If I was, there would be no such thing as an Apple Store where everyone can try a new Mac before they buy.  If nothing else sells the Nook, I think that simply being available in a store that most people can get to with ease will sell it.

So, whose side are you taking in the big eReader War?  Kindle, Nook, iPad, or will you just stick with a good ole paper book?