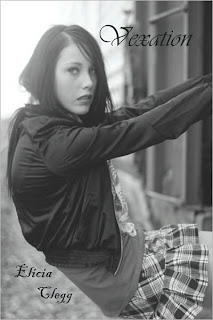 In the midst of trying to finish Austen’s Emma, I decided to try to go ahead and read a book that was sent to me by the author to review.  As far as books go, other than Harry Potter, suspense and somewhat scary novels are my guilty pleasure.  So, when I received an email about the novel Vexation by Elicia Clegg, I jumped at the chance to read and review it.  It is not a really short book, but it is not an extremely long novel at 312 pages, so it only took me part of last night and part of this morning to read.

The time frame of the novel stretches from 1992 to 1997 with many flashbacks and then sections in the novel’s present.  It begins with the main character, Devin Sinclair, winning an award for her writing and then ends abruptly with Devin’s kidnapping 3 pages later.  We are then taken to March 30, 1993, “9 months later.” as the novel tells us.  Devin is being released from a psychiatric hospital.  Then we are whisked back to 1992, and page later back to 1993, and Devin is on her way home.  Chapter 1 ends with a glimpse into what is going on at Devin’s kidnapper’s “home” if you will.  Yes, all of that takes place in only Chapter 1.  Throughout the book, Clegg takes us on whirlwinds of suspense as we are shoved back and forth from Devin’s current state in the aftermath of her kidnapping and then back to her kidnapping itself.  All the time, we (and Devin) are attempting to determine what the “truth” really is.  Is this all in Devin’s mind?  Has she simply gone crazy?  Or is it something more?  I can say that Clegg did a fantastic job in keeping the suspense going.  There wasn’t a time that I was bored reading this novel.  She has our minds as readers just as confused as Devin’s fragile mind, which makes the novel all the more enticing to read and find the truth out for ourselves.  We are placed into Devin’s world of the “game” that Grandfather, a famous writer, has been playing for years in order to write his books.

The only criticism that I have is that I think, in parts, the novel jumps around too much from flashbacks to the present.  I understand the point of showing the events to us in this way; however, there were a few times during the reading of the novel that it made it more confusing and hard to read than it should have been since there was already so much confusion going on that was supposed to be there.  But this was not enough to stop me from enjoying the novel.

Clegg’s novel is a fantastic psychological suspense novel that will capture your mind and throw you into the cat and mouse mind games with Devin.  All in all, I’m giving this one a B; I enjoyed it, but there were a few things about how it was written that could have been better.

For more information on Vexation and Elicia Clegg, including how to get a copy of this keep-you-on-your-toes thriller, visit her website.