Some of you may or may not know this, but I’m HUGE into technology, and do somewhat consider myself a “techie” person.  Of course, when I found out that the iPhone 4 was being released, I HAD to have one.  I had an older iPhone 3G, and I chose to not upgrade to the 3GS because I knew the iPhone 4 was coming.  Many of you have also probably read somewhere or another that the iPhone 4 has had many problems, beginning with the shortage of phones on the pre-order date of June 15 and the latest being the dropped calls and bad reception.

I chose not to pre-order the phone for two reasons–(1) I wanted to pay cash for the phone and you couldn’t do that on pre-orders and (2)  I love waiting for things to be released.  So, ultimately, I decided to buy it on June 24th–the long awaited release date.  I found out that the only places that would be selling to walk-in customers would be Apple and Walmart.  Since the closest Apple store to my house is roughly over an hour away, I chose Walmart.  Expecting long lines, I chose an obscure Walmart in a very small town.  Arriving at 4 am, I expected that there might be a few people starting to show up by 6 at the latest.  Boy, was I wrong!  By 8 am (the scheduled release time) only four people had shown up.  The first two of us received the only two iPhone 4s that they had.  Yes, I was #1 in line.

Excited about my new phone, I hurried home to play with it.  Upon getting on the internet on my computer, I read about the problems the phone was having.  So I tested it for myself.  At my house, I get spotty 3G service with any cell phone, and this was no exception.  I didn’t experience any dropped calls at home and my service was the same as it was on my previous iPhone.  Thinking this may not be testing it in an optimum environment, I drove to my town’s main center, and the reason for it getting 3G service to begin with, Freed-Hardeman University.  I had 3 to 4 bars of service the entire time while making several phone calls and holding the phone in various ways.  This was exactly what I had on my old phone.  Verdict—the antenna problem must not be affecting every area or every phone.  I have yet to experience service problems.  The phone is working great.

Other features…the phone’s screen resolution is high-resolution (960 x 640) retina display, which prevents you from seeing the pixelation of the screen.  And all I can say for this is WOW.  Apple really hit a home run with this display.  It is gorgeous, and no pictures can do it justice.  Also, with the new iPhone (and the new software available on the 3GS phone) you can have a picture on the background of your home page (that’s mine below): 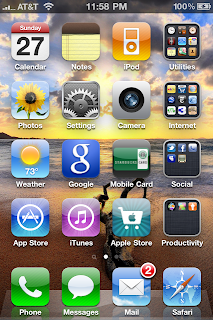 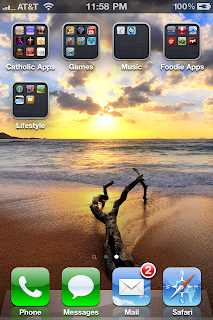 Because of the HD resolution on the phone, you do need an HD wallpaper to make it really pop.  Another great feature is the folders (you can see them on the right of the 1st screen above and at the top of the 2nd screen above).  You can organize your apps into different folders so you don’t have several pages of apps as you once did.  Also, the software iOS 4.0 allows for multitasking on the 3GS and iPhone 4.  This is helpful if you use certain apps often.  You simply double click the home button and your most-used apps appear at the bottom of the screen.  There is also a 5 megapixel camera (both on the front and back) on the phone that does take a decent picture for a phone camera.  The back camera also has a flash.  I took a picture of my tea mug and Emma for an example (I’m not the best photog): 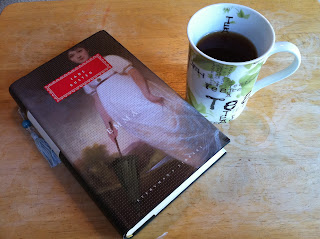 This is just a short review of all the iPhone 4 can do, so what’s the verdict you ask?  I give the iPhone for an A.  I’ve yet to have issues with mine, and it works wonderfully!  If you can get your hands on one it is well worth it!