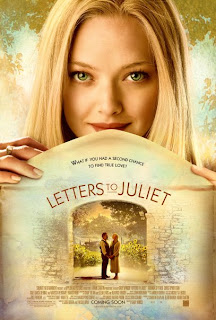 If I had this blog up earlier, I could have posted this review much earlier; however, procrastination got the best of me.  Back to the topic at hand…Letters to Juliet.  My husband and I went to see this movie while on vacation in Florida.  Of course, I had to drag him with me.  He was not very keen on seeing a “chick flick.”  But I can say that we both actually enjoyed the movie quite a bit.  Ok…well, I enjoyed it more than he did, but it was a very enjoyable movie.  Let me first say that the movie was inspired by the book Letters to Juliet, that tells the story of the real Secretaries of Juliet who are sanctioned by the City of Verona to answer letters that have been written to Shakespeare’s famous tragic character.  I do have the book, and I will be reviewing it as well as telling you more about the Secretaries at a later time.  Now on to the movie review…

Of course, there aren’t many (if any) special effects, which we all know makes the movie fail in comparison to the larger budget action films of James Cameron and other “master” cinema moguls.  Because of this, it really is a chick flick, and if you do see a man there, he is either there with a wife, girlfriend, or he’s proudly gay and as much into the film as the girls he’s probably with (sorry, there wasn’t a way around saying that.  I have a few male friends who would have throughly enjoyed this movie for that reason.)  However, the photogenic Verona and surrounding areas in Italy more than make up for this “lack” of action!

To comment on the acting for a bit, I will say that Amanda Seyfried (Sophie), Christopher Egan (Charlie), and the elegant Vanessa Redgrave (Claire) simply shine in this love story.  The ladies who play the Secretaries of Juliet are also quite good actresses.  However, the acting, in my opinion declines with Gael Garcia Bernal, who plays Sophie’s fiance Victor.  Yes, I know that he is supposed to be the annoying idiot fiance who Sophie is in love with during the beginning of the movie.  But I will say that I think his part was a bit overdone.  I’ll try not to give any spoilers, but he could have been dismissed earlier in the movie than he was.

The story line of the movie, however, redeems the lack of crowd pleasing action and bad acting by some.  If you have seen the trailers to the movie, it gives you the meat of the story.  Sophie & Victor are in Verona (yep, where Romeo & Juliet met) on a pre-honeymoon since Victor will be too busy with his restaurant once they have the wedding.  But Victor stays busy on the trip leaving Sophie to explore Verona alone.  She stumbles upon Juliet’s house where she sees women writing letters to Juliet.  She sticks around to see that the letters are removed from the wall and taken away, thus the fact-finding Sophie follows.  She discovers the Secretaries of Juliet who answer the letters of these women.  Eventually, Sophie discovers Claire’s letter recalling her love for her wonderful Lorenzo.  Well, we’ve all seen from the previews that Claire (along with her hard-headed grandson Charlie) travel to Verona and ultimately meet Sophie.  We also learn that they begin a journey to find Lorenzo, which if you’ve seen any of the trailers you know she does find him.  I couldn’t believe that the trailers gave that away, but it really doesn’t give it away.  The screen writers have done an excellent job of taking the plot in wonderfully mixed up directions so that we are enjoying the journey as much as the characters.  So what of the scenes in the previews with Charlie, the bull headed grandson, and Sophie?  Well, I’m not going to tell you, but I’ll remind you that the fiance Victor is still in the picture!!!  I’ll let you decide whether or not you want to see whether Sophie chooses Victor or Charlie by going to see this adorably addicting and sweet movie.

So, now for the verdict…how am I going to rate Letters to Juliet?  The story line, setting, and the acting of our true main characters (Sophie, Charlie, & Claire) redeem the movie from the bad acting of other characters and the fact that some people don’t like “chick flicks.” I definitely didn’t waste my money going to see it, and I also do plan to purchase it when it comes out on DVD.  It also led me to find out more about the Secretaries of Juliet, so I purchased the book.  Verdict:  Letters to Juliet received a solid A in my book.  Good job on making a great movie that even my husband enjoyed!

Make sure to watch for the review of the book Letters to Juliet, too!!!